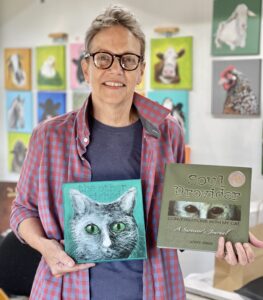 For Jody, writing and art are healers. Whether she’s writing a script for her radio show, painting a portrait, a landscape or an abstract expression, Jody’s distinctive personal style and way with words combine to create a transformative experience.

Jody grew up in a small farming community in western Illinois, where she was greatly influenced by the graphic art on cereal boxes and other products and signs in her family‘s grocery store, the Sims Royal Blue. She studied fine art at Illinois State University in the 1970s, and then embarked on an extraordinary life as a graphic designer, illustrator, muralist, film producer, event planner, newspaper publisher, and community leader in San Diego, CA.

After a long battle with cancer, Jody found her way back to painting, which led to her first book “Soul Provider: Conversations With My Cat.” The book showcases 20 paintings of her cat’s face, along with journal entries of her experience fighting cancer. The inspiring and uplifting book won a Nautilus Book Award in 2014.

Jody’s more recent book, is “Sanctuary: The will To Live, The Courage to Love.” It centers around her series of portrait paintings called “Compassion Makes Life Beautiful.” The subjects are farm animals who have been rescued from abuse or neglect and who are now living in sanctuaries. Through her creative use of inspirational quotes and soulful art, Jody unfolds her awakening to compassion and the oneness of all sentient beings, as well as her own personal quest for sanctuary after moving from California to Tennessee in 2014.

For several years, Jody hosted the radio show “The Authors Page” on WUOT 91.9FM. The program, which she created, was a project of the Authors Guild of Tennessee and WUOT. Each week she highlighted an author with a connection to Tennessee by telling their life’s story, describing their work, and sharing inspirational quotes from the author.

Jody currently lives in Vinita, OK with her wife Susanne and their two cats. When she’s not painting or writing, you’ll most likely find her on a golf course or being creative in the kitchen, discovering new vegan recipes!

Contents of this site including text and media may not be reproduced without prior written consent.

Audio and video elements of this site are property of their respective owners and are used with permission.